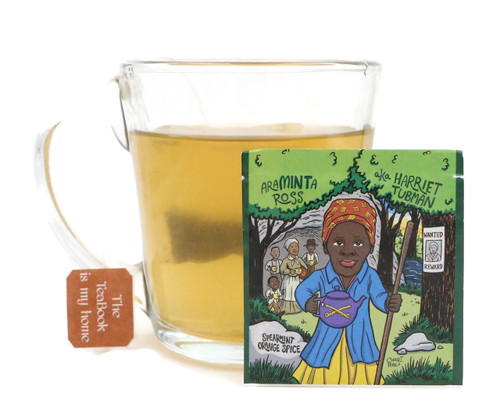 "Every great dream begins with a cup of tea." - Araminta Ross (Harriet Tubman)

Our EqualiTEA Series:  Araminta Ross was truly a great American.  Known mostly for her work on the Underground Railroad, she was also a scout, spy and nurse for the Union.
As the "Conductor" of  The Underground Railroad  she never lost a fugitive or allowed one to turn back.  After the war she turned her residence into the Home for Indigent and Aged Negroes.
It is not documented what flavor tea she served to the many people she saved and cared for but we think our flavor would be her pick.
We honor her memory and great work with our Araminta Ross tea, with a blend of tasty flavors to sooth and comfort, much like she did for so many.

The TeaBook - The Best Tea Storage Device Ever!